This is Easter Sunday

Today, we are posting an adaptation from a devotional produced as a Capstone Project for the Centre’s MA in Christian Formation and Discipleship which begins again in February 2020. If you are interested to find out more about the next course you can read here and contact us to register your interest.

Yesterday we read the bleak and despairing beginning of Psalm 13, today we can read the end of it;

But I trust in your unfailing love; my heart rejoices in your salvation.
I will sing to the LORD,
for he has been good to me.

Below is Caravaggio’s famous painting of Thomas inspecting the wounds of Jesus. So many images that represent the resurrection lean into the sentimental, the fantastic, the ethereal. But what is truly incredible is that God raised Jesus up in a body that will never taste death again. I like Caravaggio’s painting for showing us Jesus as truly human. 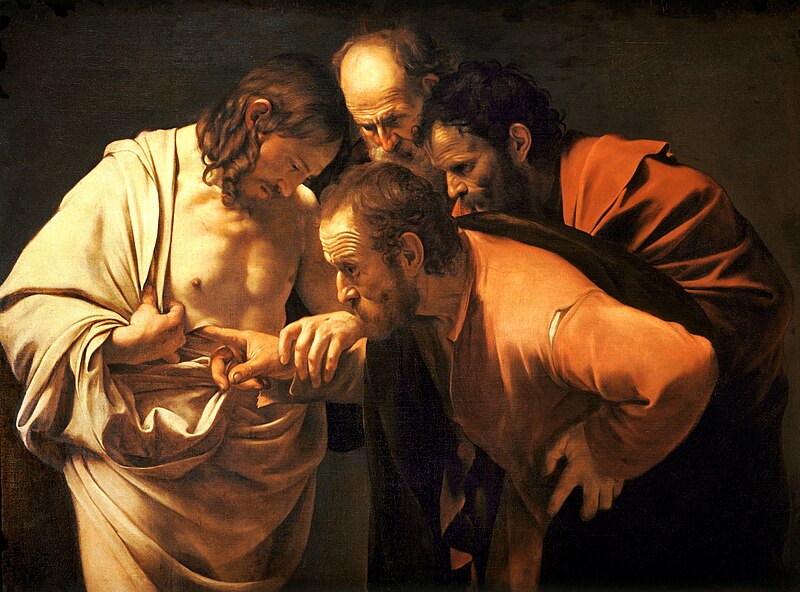 A few years ago I attended the Easter Vigil Service at St. George’s Cathedral in Cape Town. It is a large Cathedral which was the location of Archbishop Desmond Tutu’s ministry and resistance during the time of Apartheid. The service was one of the most immersive embodied experiences of the gospel story I had ever participated in.

The service was like an extended parable of the impact of resurrection. As you read the description, think of it literally but also use your imagination to see the way in which it acts as a symbolised experience of the story it is rehearsing.

It begins at 10:30 pm, which for most of us should be the end of our day. In tiredness, at the end of ourselves but carrying expectation, we enter this huge cathedral space, entirely engulfed in darkness. Only the echoes betray the size of the interior space. A small candle unlit is given to each person with an order of service that spans pages. This Easter vigil service will be 3 hours long.

The service begins by telling the story of creation, and how there was a light in the darkness. Everyone lights their small candle to be able to participate in the liturgy that will follow. Slowly but surely our eyes adjust to the low light. We begin to notice the candle-lit faces of those across the aisle and the low glimmer of candlelight reveals the huge stone pillars that reach upwards into the darkness.

An hour and a half goes by in which the stories are told of Israel’s wandering in the wilderness led by clouds in the day and pillars of fire at night, of deliverance from Egypt, and the words of the prophets foretelling the coming of Messiah. Hymns are sung without accompaniment, and the voices fill the space with sound.

Next, the Holy Week narrative is summarised as it had been participated in more fully in a series of services that spanned the preceding week. The resurrection narrative begins and at the moment that recounts Jesus emerging from the tomb the lights of the cathedral are turned on, the organ sounds and the choir break into song.

It is a sensory overload that mirrors the experience of the narrator in CS Lewis’ The Great Divorce, who experiences the pain of the solidity and reality of heaven. The Cathedral’s true nature had been cloaked in darkness until now, is now fully lit, the upper reaches of the roof, the length of the building are fully revealed. So too are the worshippers, all brightly lit and blinking to re- adjust their vision to this bright, piercing and revealing light. The peace is briefly passed amongst the newly discovered congregants and we return to see the catechumens (candidates for baptism) respond to the Archbishop’s questions before their baptism the next day.

This was a tangible experience of what happens in the resurrection. Eyes that had become accustomed to darkness are blinded by light. Grandeur and spaciousness that was cloaked in darkness is revealed as beauty. As we adjust to the new way of seeing, we observe our neighbours, strangers and even enemies and embrace them as family. We celebrate the new life of others and of all creation.

The Gardener of the New Creation

Resurrection Sunday is the defining event of the Christian Calendar, just as Jesus’ death on a cross was not the expected outcome of God’s messiah, resurrection in the middle of history was not a reality anyone had anticipated.

Many Jews believed in a resurrection, but at the end of time and for all people. This was an unprecedented reality, not because someone had not come back to life again (Jesus had done that for Lazarus), but because of the meaning of Christ’s resurrection.

The Early Christians understood Jesus’ resurrection as the beginning of God’s work of new creation. He was the first-fruits, the first-born from among the age of those who were dead. But what exactly did that mean?

Well, the clue is when He appears for the first time.

“Mary Magdalene turned around and saw Jesus standing there,
but she did not know it was Jesus…supposing him to be the gardener.” – John 20:14, 15

A couple of things are significant here. First, he appears to a woman. In 1st Century Palestine her testimony would not have stood up in court. She cannot be a witness in the world and yet she is commissioned as the first gospel preacher in the Scriptures! Secondly, her mistake (a prophetic one I think) is that Jesus was the gardener.

Adam had failed at his image bearing, garden tending vocation. Now, Jesus is the second Adam, the true gardener. Jesus is the seed planted in the garden too.

“Unless a seed falls into the ground and dies it remains alone; but if it dies, it bears much fruit.” (John 12:24)

This garden brought forth the first fruits of the resurrection. He is both the first fruits and the one who cultivates this new life of faith in all who believe! Through Adam the garden became a wasteland, a desert and a wilderness. Through Jesus the garden will be restored, and an army of garden tenders will be raised up with Him to join Him.

In the closing scenes of the book of Revelation, John sees the new earth coming down from heaven. What does it look like? A garden in which the tree of life stands!

With Jesus’ resurrection God has begun His new creation project. With His ascension and sending of the Spirit at Pentecost we are recruited to be those who garden the wilderness.

NT Wright unpacks it this way;

“The mission of the church is nothing more or less than the outworking, in the power of the Spirit, of Jesus’ bodily resurrection. It is the anticipation of the time when God will fill the earth with his glory, transform the old heavens and earth into the new, and raise his children from the dead to populate and rule over the redeemed world he has made.

If that is so, mission must urgently recover from its long-term schizophrenia. The split between saving souls and doing good in the world is not a product of the Bible or the gospel, but of the cultural captivity of both. The world of space, time, and matter is where real people live, where real communities happen, where difficult decisions are made, where schools and hospitals bear witness to the “now, already” of the gospel while police and prisons bear witness to the “not yet.”

The world of space, time, and matter is where parliaments, city councils, neighbourhood watch groups, and everything in between are set up and run for the benefit of the wider community, the community where anarchy means that bullies will always win, where the weak and vulnerable will always need protecting, and where the social and political structures of society are part of the Creator’s design… And the church that is renewed by the message of Jesus’ resurrection must be the church that goes to work precisely in that space, time, and matter. The church claims this world in advance as the place of God’s kingdom, of Jesus’ lordship, and of the Spirit’s power.”

Where do you see wilderness and wasteland around you this Resurrection Sunday? What would it look like if one who faithfully bears the image of God cultivated it into a garden?

Eugene Peterson wrote a book on spiritual formation called “Practise Resurrection”, what might it look like to practise resurrection for you?

Consider how you can foster holy ambition to be formed more and more into the likeness of the new creation gardener, for the sake of your community and the world this Easter.

Christmastide: A Time to Escape or Inhabit?

A Short Theology of Dog Ownership